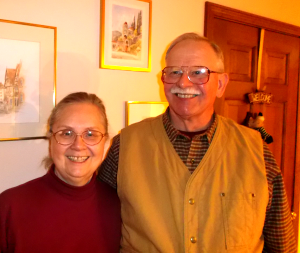 Fred was born in Chicago, Illinois in 1946 but did not grow up there. My sister, Margaret, was born in Oregon, Illinois in 1948. My family moved several times until 1956. When I was nine years old, we settled in mom’s home town of Victoria, Illinois. My dad, Frederick J. Gerth, became half-owner in the village hardware store. A few years later mom returned to the major part of her teaching career in the local consolidated school district. We lived conventional, small town lives. I graduated from high school in 1964. I graduated from Iowa Wesleyan College in 1969. Later that year I began my civil service career with the Illinois Environmental Protection Agency in Champaign-Urbana, Illinois, home of the University of Illinois. Sharon and I got married in 1977. I retired in 2002.

Sharon was born in Boulder, Colorado in 1947 and lived in Illinois, Colorado, Nevada, Montana, Connecticut, and New York before settling in Champaign-Urbana. Her education included a B.S. in Nursing (1970) from Southern Illinois University at Edwardsville, a Master of Education (1976) from the University of Illinois, and a Master’s (1980) and a Ph.D. (1992) in Nursing from Indiana University. She held positions as a staff nurse, administrator, nurse educator; and was a member of a number of professional and honor societies. Her career in nursing education involved administrative and faculty (professor status) appointments at Parkland College in Champaign along with adjunct faculty status at the University of Illinois Nursing Program. She retired in 2001.