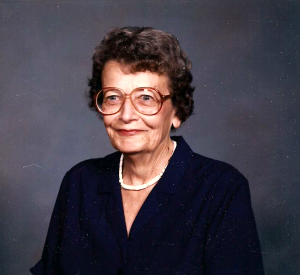 Marjorie was born Marjorie Ellen Heaton on August 6, 1916 in Victoria, Illinois. She came from a family that valued education. As a high school senior, she borrowed money from a family member to attend college and obtained a teaching certificate in 1936. Her teaching career began in country school near where she grew up. On June 8, 1940 she married Frederick J. Gerth of Wapello, Iowa. They traveled to several cities and towns in the early years of their marriage. Their son, Frederick A. Gerth, was born in Chicago on August 22, 1946 and their daughter, Margaret Ann Gerth, was born on February 23, 1948 in Oregon, Illinois. Her family moved to Victoria, Illinois in 1956 where Marjorie soon became a full time teacher. Victoria was new to her family but for Marjorie, it was a permanent homecoming. The R.O.V.A. Consolidated School District was the longest and last employer. The greatest loss in her life was the death of her husband in April 1972. The greatest joy in her life was her three grandsons from daughter Margaret and her husband. When Marjorie retired in 1981, she had taught 39 years. One of her activities in retirement concerned the establishment of the Victoria, IL library. Marjorie loved, enjoyed, and was interested in people. She gave support to everyone of all ages wishing to further their education. She took every opportunity to especially encourage women as many of her generation saw little need for their education. Marjorie was such a genuine person that many shared joys and struggles with her. She was a lifelong learner and educator.